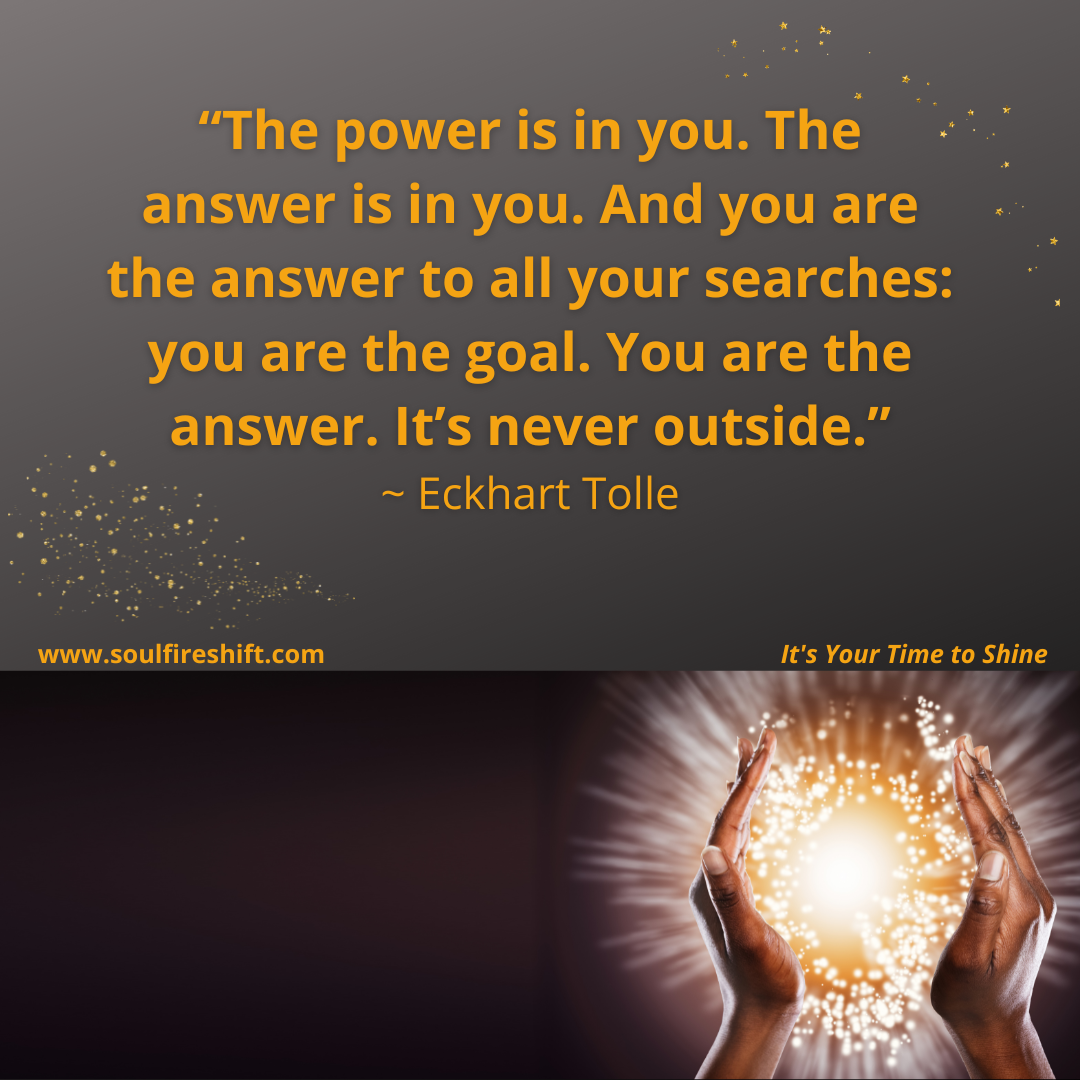 I’ve been thinking about power and the feeling of empowerment lately.  Last week I wrote about 4 surefire ways to empower yourself when you’re feeling powerless.

…especially in the U.S, but also worldwide as we witness a rise in the “strong man” style of leadership.

“I am not your master. Because you have drunk, you have become drunk from the bubbling stream which I have measured out…. He who will drink from my mouth will become as I am: I myself shall become he, and the things that are hidden will be revealed to him.”

According to Elaine Pagels, author of “The Gnostic Gospels”, in this quote, Jesus is telling Thomas that they are equals and come from the same source.

She points out that this is a far different view from “orthodox Christians [who] believe that Jesus is Lord and Son of God in a unique way: he remains forever distinct from the rest of humanity whom he came to save.”

What’s interesting is that this quote is from the Gospel of Thomas, which most people have never heard of.

That’s because it’s not in the Bible.

The gnostics were a group of early Christians who believed that by knowing yourself through contemplation, you could know God.  They didn’t believe it was necessary to have a “middle-man”, like a priest, in order to connect with God.

And, in fact, they rejected the formal structure of what came to be known as the orthodox Christian church (later known as the Catholic church).

They also didn’t believe in a separation between the divine and human beings. They believed the divine lived in each person, whereas orthodox Christianity saw God as a completely separate entity.

Unfortunately for the gnostics, however, when the Roman emperor, Constantine, converted to Christianity in the 4th century and made Christianity the ideological basis for the empire, he and the orthodox Christian leaders banned all other Gospels besides the 4 “approved Gospels” we find in the New Testament today.

They disagreed with many of the gnostic beliefs around Jesus and God.  They also understood there was no money or power in a belief system that didn’t need middle-men, and so they labeled the Gnostic Gospels heresy and murdered and incarcerated people for having them.

That’s why it’s only relatively recently that we’ve found copies of the Gnostic Gospels hidden in unearthed clay pots in the Middle East.  It must have been too heart-breaking for some people to destroy their beloved sacred texts, so they hid them instead.

And thank goodness for us they did.

It seems to me that, in almost every case of book banning, there’s a truth that threatens the power of those in control – hence their desire to ban the book.

And the truth, according to the Gnostic Gospels, is that you are God…I am God…we all are God.

There’s no outside divine being that’s separate from us.  We are all pieces of God.

Pretty revolutionary, right?  At least from the traditional Christian perspective that dominates our culture here in the West.

But I like this idea.  I don’t know if it’s “THE truth”. I don’t think any of us will know “THE truth” until we die.  And to be clear, the gnostics held some beliefs that don’t make sense to me at all.  (It’s also worth noting that there were varying beliefs among the gnostics.)

But this concept of “God”  makes far more sense to me than the “man in the sky” version of God who judges…who’s supposed to invoke fear…and who claims there’s only one true way to “Him”.  (Nevermind the fact that every religion claims to be the “one true way” to “Him”.)

It also makes sense to me why organized religion would find this view so threatening.  If God wasn’t a man in the sky who controlled your fate on “judgment day” and should be feared, then how would they control the masses?

If each person were empowered with divinity and agency as a birthright, then how would they ensure the commitment of time, money, faith, and loyalty from their flock – the very foundation of the power structure?

If outsiders had the same access as “insiders”, what would be the point of being an “insider”?

And if there’s no one at the bottom with less access, there’s no power at the top.

Look, the fact that religions give God a gender…AND that the patriarchal power structure of those religions decided that gender was male…should be our first indication they might not be the whole truth, the only truth, and nothing but the truth, if you ask me.

To me, it’s the weirdest concept in the world that “God” would have a gender.

Add in that more people have been killed, abused, and degraded in the name of religion than for any other reason in the history of mankind, and it just doesn’t make sense to me that religion is “the way”.

I think the power lies within each of us.  No one is coming to save us.  We are here to save each other and save ourselves.

And by “save”, I simply mean to lift each other up.  To expand consciousness.  To evolve humanity into a kinder, gentler, more cooperative, more loving way of being.

That’s the Divine Feminine in all of us that’s been degraded for centuries, while the Divine Masculine has been revered and favored.  That lack of balance has led us to where we are today in humanity where patriarchal power-over structures are leading us to some very scary and inhumane places.

It’s also why they’re crumbling and desperately trying to cling to their power, which is why we’re seeing increasingly violent and aggressive forms of masculine power.  It’s the whole “might is right” philosophy rearing its ugly head again.

But it is evaporating.  It’s simply where humanity is headed.

It’s just not going to be smooth or easy.  People don’t give up power easily, especially when they’re used to having it for so long, and when they’ve been told it’s theirs by divine right.

So what is our job in this time?

Well that’s up to each of us.  The power is within us to decide.

My personal view of my own job is twofold.

The way I see it, you are the one you’ve been waiting for.

You are the light on the path.

It’s not in “God’s hands”…it’s in your hands, my hands, everyone’s hands because we are “God”.

Yes, I do believe teachers like Buddha and Jesus had unique understandings of the universe and the divine that are worth consideration and contemplation.

I just don’t believe they possessed a divinity that’s different from the rest of us.  (I also believe their messages have been manipulated over centuries of translation and interpretation to serve those in power.  I also believe there were equally wise women whose messages were never heard because…well, they were women.)

Yes, I do believe there are unseen beings – angels, spirit guides, whatever you want to call them –  that assist us on our journey and that we can call on for help.

Yes, I do believe there is a divine flow of pure love that runs through the universe and helps carry us to our destiny.

I just don’t believe we’re separate from that flow.

As the Sufi poet Rumi said…

…“You are not a drop in the ocean; you are the entire ocean in a drop.”

So how do you see your job during this time of great transition?  What is your role?  How do you want to influence humanity at this moment in time?

I believe it’s going to take all kinds.

==> It’s going to take the destroyers of the old and the builders of the new.

==> …and it’s going to take the iconoclasts who can no longer tolerate business as usual and feel compelled to change it.

So what is your role?  You came here to play a unique part in this unique time of change.

Where is your heart pulling you?  The power is yours.

All you have to do is choose consciously, and act with the purpose of someone who has the divine right, agency, and power to affect change.